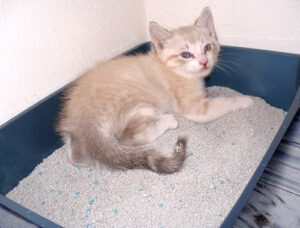 If you have cats then you definitely have at least one if not multiple litter boxes in your home. The most popular litter that has been widely used for decades is the clay litter known for its low cost, and strong clumping abilities. But in recent years there has been a shift throughout the pet industry and cat owners are no longer focused on the cheapest products, but what products are the safest to prolong the life and well-being of their kitty as well as what leaves behind the smallest ecological footprint.

But with good intentions in mind, many still don’t realize that the standard clay and crystalized litters can be potentially dangerous for cats and can have a detrimental effect on the environment.

Why is clay and crystal litter bad for your cat’s health?

Clay litter is made from bentonite clay and is used as kitty litter for it’s moisture absorbing abilities, however it can dangerous if accidentally ingested. Of course we don’t often see our cats nibbling on what they are meant to pee on, but small pieces can stuck to their paws as they walk through it and be inadvertently licked off at a later time. Why is this a problem? Bentonite is so good at absorbing that it can expand up to 15 time its original size. This is great for clumping up litter to make it easier to scoop, but dangerous for your cat as if swallowed can cause gastrointestinal issues and a possible blockage within the intestines.
Crystal litter is made from sodium silicate sand, the same type of material used in moisture control packets labeled Silica Gel and clearly states “DO NOT EAT”. The silica gel crystals has been turned into a cat litter product due to its strong odor and liquid absorbing qualities; It’s even more powerful than clay based litters as it can absorb up to 40 times it’s own weight in liquid! Just a small amount of the crystals being ingested by your cat has the potential to cause an obstruction in their stomach and it just doesn’t seem worth the risk.

Why are clay and crystal cat litters bad for the environment?

First off, both types of litters are made from non-renewable resources – meaning it’s something taken from the earth that can never be replenished. Clay litter is technically natural, but it actually destroys the environment around it when made and it is not compostable. The bentonite clay is formed overtime as rocks are eroded away by the weather and the tiny pebbles compacted into the ground basically become a mineralized soil. Since it sits within the earth’s crust, a process called strip mining in order to extract it. Forests are cut down, habitats destroyed, and large amounts of soil and rock are removed just in order to access that layer of minerals. Once that clay is removed, it’s gone for good, we literally just took a piece of the earth to then be used for a short time as a cat bathroom where then it will inevitably end up in the landfill. Crystalized Silica is made from a similar mining process and then mixed with chemicals to be separated from the soil.

What is the alternative to clay and crystal cat litter?

With massive effects on our environment and our health, it makes you wonder why it’s marketed on a mass scale, but luckily there are alternatives that provide a healthy bathroom environment for your four-legged friends and is 100% compostable. There’s all types of compostable litters out there from pine to bamboo and even corn! All of them are grown from plants on the ground but are not part of the ground itself making it a renewable resource that can remove all guilt and fear when making your cat litter purchases!

Check out this list we made for you showing the top truly compostable cat litters.