So you’re a pet owner now. You’ve allowed animals to enter your home and share a living space with you. But now they’ve taken advantage of your good nature and abusing the freedoms you’ve bestowed upon them. They’ve infiltrated every room and claimed every item as their own. The cats are in the living room clawing up the couch and curtains, while your dogs are marking their territory on every space imaginable. It’s time to reclaim your house and set some booby traps that will be triggered by your unsuspecting pets, restricting them from certain areas that you’ve deemed off limits. 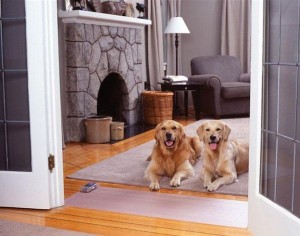 Help your cat or dog learn good house manners with this clear plastic mat that can be placed on any piece of furniture or surface area in order to discourage them from jumping or walking on to it.

How it works:
ScatMats are designed to send a 3-second static pulse when any pressure is applied to it. Running on a single 9-volt battery, this low-powered unit sends just enough of a signal to scare or surprise your pet rather than cause any sort of pain.

The idea is that your dog or cat with quickly associate the mat with an unpleasant sensation and begin to avoid that area to prevent further bothersome experiences. Eventually, just the sheer sight of the mat can keep your pets away, therefore the company also sells “dummy mats” that don’t contain any electrical force – for a lower price – in hopes that your pet will not even want to test any new mats brought into the home.

There clear ScatMats are made with a flexible PVC material that can be shaped to fit oddly shaped areas and can be folded up for easy storage when not in use. One 9-volt battery can last months or even longer depending on how often your pet goes near to activate it. There are three different intensity levels to adjust appropriately for different sized pets

If you are worried your cat or dog has the ability to jump over the mat to get by, you can purchase extension panels to expand the surface area the mat covers.

The ScatMat has become quite a successful product over the years – it is as if you have hired your own personal dog trainer to stand in the doorways 24/7, repeatedly saying “No!”

To further aid you in the training process, an indicator has been built in that will blink to tell you just how many times your pet has “tested” the mat since it was last turned on. Your goal will be to have that indicator not blink at all, letting you know that your pet has given up trying to access the blocked off area and has given into the intimidating power of the ScatMat.

You might be wondering, won’t my children and I get a shock as well when we walk over the mat? It is true that one will feel a small static pulse when walking on the mat barefoot or in thin fabric, but is completely painless and is generally far less noticeable to humans. 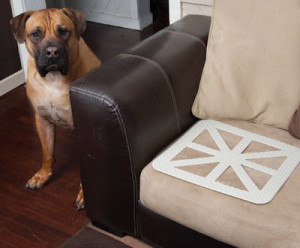 The X-Mat is a similar concept to the ScatMat, but this time, no batteries are needed.

How does it work:
Instead of sending an electrical signal through the material, it is the material of the mat itself that is the deterrent. Made up of a hard plastic, the mat contains pointy nubs throughout its surface that will irritate any sensitive paw that attempts to walk across it. Again, the purpose is not to cause any harm to your pet, but to simply cause just enough distress that will discourage them from re-entering that area in the future.

Although the material prevents the mat from being rolled up, the newer designs allow you to fold it in half for easier storage.

Like the ScatMat, you can place the X-mat on most surfaces to prohibit passage – most commonly placed on couches and in doorways. One big advantage of the X-mat for many pet owners is the absence of fear from exposing their pets to any electrical forces, however the disadvantage is the small size of the mat. The X-mat comes in at around half the size of an average ScatMat, but at the same time it is about half the cost. 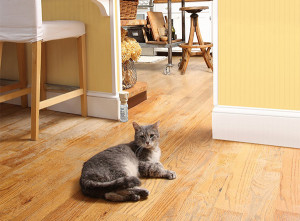 This clever product uses a harmless spray that will jolt your pet into running the other way.

How it works:
This small device possesses a 3-foot motion detector that sprays a harmless, odorless, and stainless gas when it senses a moving subject nearby. The inert gas used is called HFC134a also known as 1,1,1,2-tetrafluoroethane – most commonly found in refrigeration units and automobile air conditioners. The release of the compressed air gives off a similar sensation as using a spray bottle to rush your cat off the counter (without the water). It catches your pet off guard, making them quickly leave the area without looking back.

Although the product has “cat” in the name, it can work for several other types of pets as well such as dogs, ferrets and rabbits. It has the capacity for around 500 sprays and requires four AAA batteries to function.

There are other similar products out there that also give out a warning beep prior to releasing a spray. The idea here being that your cat or dog will begin to associate the beeping with the spray so when the spray ultimately runs out, the beeping with still deter them – believing the spray is still there. These enhanced products are harder to find nowadays as the beep feature increases the price quite a bit, and pet owners found the beeping to be quite annoying after repeated activations.

The one big downside – unlike the mats, you are limited to the areas you can place the spray. Unfortunately, the spray cannot differentiate between an animal and a human and can end up spraying you if you are within detection. The SSSCAT spray must be placed and angled in certain areas that only your pet would come in close contact with.

Booby traps that will restrict pets from areas in your home
Tagged on: potty training