If your cat has begun to urinate outside the litter box, the first thing you would want to do is determine whether this is stemming from a behavioral issue or a lurking medical condition. You may be able to speculate the underlying cause by observing the cat’s bathroom habits.

If your cat seems to be straining to pee, having frequent urinations, and drinking excessively (or not drinking at all), you may be looking at a medical issue. It could be more of a behavioral issue if your cat is displaying certain spraying tendencies – more of a splatter pattern, released in a vertical motion on furniture and walls – greater signs of some sort of stress.

Of course the first and foremost thing to do is to contact your veterinarian to rule out any medical issue. A physical exam and urinalysis may be performed, checking for the presence of bacteria, crystals, blood cells, or unbalanced pH levels, to determine if there is a possibility of an internal complication present. The most common issues found are urinary tract infections, cystitis and kidney problems that can cause either a cat to produce more urine, or add an increased urgency to urinate.

Cystitis is the general term used when the cat is found to have an inflamed bladder, which can be caused by a number of things:

The most common reason cats develop these syndromes is dry commercial pet food. Due to the lack of moisture in the diet, the urine becomes too concentrated and alkaline. Veterinarians will more than likely recommend prescriptions foods, which will force more of an acidic urine to be produced and lower the levels of magnesium and ash in order to prevent any further formations of crystals or stones, and encourage the cat to drink more. A popular product line prescribed by veterinarians is the Hills Urinary Care, offered in both a dry and wet food formula. Other medications may be required.

Hopefully with the right diagnosis and the right treatment, your cat will be healed of his ailments and go back to having a normal bathroom behavior.

When all signs of illness is ruled out, the only conclusion that can be made is simply – your cat is uncomfortable with using the litter box. The solution to this problem is not so simple as you will need to closely observe what changes have been made to your cat’s environment that would cause such uneasy feelings.

Change can lead to stress.

Possible changes that have recently made to cause your cat’s anxiety could be (1) New residents in our home (whether human or animal) (2) Moving to a new residence (3) Schedule changes (causing you to be home less or at different times). Any of these major life changes that affect us have so much more of an impact on our cats. One must understand that cats, like any of our pets, depend on us for the majority of their basic needs. Any deviation from their normal routine can make them question their own safety relating to when their next meal would be and if their caretaker will still stay with them. This type of intense anxiety can cause your cat to urinate more and perhaps try to mark their territory in an effort to claim their space.

There are a few techniques you can use to try to alleviate the problem:

Despite most litter boxes being constructed on the smaller side, cats actually like a lot of space when going to the bathroom. They want to be able to squat in different sections to avoid going in the same area twice. 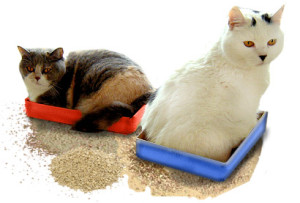 Perhaps your kitten has matured and now requires an adult size litter box. Or perhaps your cat has gained some weight and has trouble stepping over the tall walls of the box. Try purchasing a larger box will lower walls to resolve the issue.

The right type of litter is also essential. Although many cats have their own preferences, the general consensus is clumping, non-scented litter. If that doesn’t work, try buying the same litter you used to give him as a kitten – to provide a more familiar sensation. If the cat has longer hair, try to find a litter that will not stick to his fur.

Accessories may do more harm than good.

Litter box liners are seemingly a good idea to us humans because it makes cleaning out a box not such a daunting task. What many don’t realize is the cat’s nails can poke holes in the liner while burying their feces, trapping the urine underneath the plastic rather than being absorbed by the litter, quickly rendering the box much more dirty in a shorter amount of time.

There are special mats that have been designed to catch the litter that gets trapped on the cat’s paws as he exits the litter box. However, these mats can create an uncomfortable sensation for those with sensitive paws and often deter them from using the litter.

Hoods may be one of the the most popular accessories that also acts as a deterrent for most litter box users. While we humans may see it as a means of privacy for the cat, the cat sees it as a way of resentfully cornering itself. In this confined, seemingly restricted place, the cat is unable to see all approaching humans and other animals. As domesticated as your cat may be, they still have that wild instinct to have multiple escape routes in any given situation.

The general rule of thumb is one box per cat, plus an extra one. Think about it – in the wild, cats have the ability to go to the bathroom whenever and wherever they please. They then bury their matter in order to hide any evidence of them being there from potential predators in the area. Having to go in the same spot everyday is a foreign concept to them and your cat may simply not understand why the bathroom is limited to only one spot.

You’ll want to have several litter boxes set up especially if your house has multiple floors, or if you own a geriatric or physically disabled cat. Cats should never be expected to venture too far when they have to go. If you have multiple floors – place one box per floor, if you have one floor – perhaps place one at each end of the building. *Make sure you do not place an litter boxes near their food as that can put them off (and rightfully so).

You may find your cat to suddenly stop using the litter box because of a recent “traumatization” they have associated with it. It could have been something as innocent as you placing the litter box near the laundry machine and the washer went off while they were peeing, startling them, and now they don’t use the box in order to avoid it from happening again.

It’s completely understandable to not want to put the litter box in plain sight, but you also cannot hide it in a damp and dark basement away from the world. Try to compromise and put it in a place your cat will always feel safe, and won’t be run off by strange sounds.

Your cat can also be fearful of another animal, especially a dog, bothering him as he attempts to relieve himself. Be creative and try to figure out a way of denying access of the box to your dog, but still providing an entryway for your cat. If another cat is the issue, place the litter in a space you can easily see so you can readily put a halt to any onlookers that go near the box when the space is occupied.

Cats are very clean animals, but do not wish to take daily showers like the rest of us – instead they use the licking method. But there comes a point where licking dirty litter off of themselves is too much for them. A good cleaning routine is to scoop the box daily, empty and refill the litter weekly, and completely clean and disinfect the box at least once a month. One might think that that’s an awful lot of litter you’ll be going through, but the trick is to fill the box with less litter. Cats actually prefer shallow litter – try only putting in about one to three inches from the bottom.

Tips for when accidents do happen