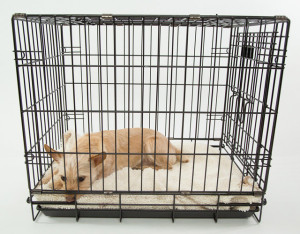 Dog crates have been used by pet owners as far back as the 1930’s, mostly used as a transportation vessel for animals on steamships, railroads, and airplanes. It wasn’t until decades later that the dog crate was used as a housetraining tool. The idea behind this added purpose was the similarity of the enclosed spacing to a den, of which the dog’s ancestor, the wolf, sees a means a safety and spend much of their lives living in enclosed quarters.

Well, this is only partly true.

It is true that a mother wolf with give birth to her pups inside a den followed by weeks of caring and providing milk for the first portion of their lives. However, as the pups grow and mature, they start making trips out of the den and eventually leaves completely. The den is still going to be a familiar place to them, and if they find themselves sick or injured, they will immediately seek out safety in the first den they find to hide while they heal. But once their health is restored, it is back out into the wild.

Dogs have inherited this natural instinct of finding enclosed quarters to when seeking safety. We can especially see this during a thunderstorm and a dog goes to hide under a bed or table. Dogs will even pursue some sort of cubby for naptime and don’t want to be disturbed.
A crate can be thought of a good substitute for a den, but it comes down to the biggest difference between a den and a dog crate… THE DOOR.

The locked door is the main cause of all the controversy with crating. Some may see it as a cruel form of punishment, while others see it as a relaxing place for the dog that encourages bladder control and prevents destructive behavior. So what is it – a prison or place of sanctuary?

The first time a dog is introduced to a dog crate is typically during his infancy. Many pet owners will introduce the crate as early as possible to instigate the potty training process. However, it is hard to gauge how much the crate is actually producing the controlled bladder versus what comes naturally with age. Similar to human infants, puppies are going to be incontinent in the earliest phase of their life. Regardless of the training method, puppies do not develop full bladder control until they are about 6 months old. It is estimated that puppies can only hold their bladder for the number of hours equal to the number of months in age.

What many don’t realize is that crate training was never originally intended for adult dogs and should be discontinued once the dog grows out of adolescence, at approximately 18 months of age. Unfortunately, people tend to get so used to the crating as part their daily routine, that the former housetraining tool becomes more of an everyday convenience. Dogs who become over-crated have the potential to become destructive, hyper, anxious, or even develop bladder infections from having to “hold it” all day.

The reasons behind over-crating causing such emotional stress, is that it deprives your canine of some of their most basic needs, such as the freedom to properly stretch their legs, walk around, interact with the environment, and of course relieve themselves.

Dogs are very social animals. Like humans they require interaction in order to learn, whether it is with people, animals, or inanimate objects. Try to imagine a grown dog for 8-10 hours a day, without any exercise, mental stimulation, or potty breaks.

Unreasonable use for punishment 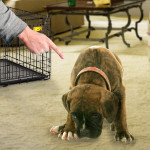 It is very important that the crate remains seen as a familiar, safe place, that your dog will want to go in on his own free will. This can be done by making the crate as welcoming as possible – line the bottom with a comfortable blanket, toss in their favorite chewtoys, treats, and feed them their meals in there from time to time. Even after the dog has been successfully housetrained, you may want to keep the crate open as a safe haven that they can always retreat to.

Therefore, crates should never have a negative feeling attached to it and should absolutely never be used as a form of punishment. Any kind of punishment could potentially cause higher anxiety and in turn, a weaker bladder, counteracting any housetraining you might have done prior. If your dog does have an accident in the house, quickly clean up the “spill” and bring them outdoors to see if they are in need of further relief.

There are many alternatives to a dog crate that you can use to continue addressing the potty issues, especially after the dog has fully matured.
A dog pen or pet gate are simple “dog-proofing” tools that can help confine a pet to a certain section or room in the house while still enabling his physical activity. This can be useful to limit any “accidents” to an easy-to-clean area, as well as separating them when certain visitors are over, and preventing access to hazardous items that your dog could ingest.

Wee Wee Pads serve as an advanced paper training method – treated with a special scent that attracts pups to urinate on its material, rather than on the floor. If your dog is incontinent or has excitable urination, a doggie diaper may be used as an additional absorbent.

If you are someone that tends to be gone for long hours in the day, you can hire someone to stop by and take your dog for a walk and some playtime. Make sure you find a reliable person such as a professional dog walker, neighbor, or close friend

Lastly, one of the most effective ways to prolong your dog’s bladder is to adopt another furry friend in the house. Giving your dog a playmate with not only alleviate boredom and minds stimulated, but increase their physical activity and decrease anxiety levels, therefore extending the time before having to alleviate.

Whether to crate train your dog or not is still an ongoing controversy in America, but other places have already settled on a decision. In Sweden, dog crates (or any sort of cage below a certain size) in the home have been banned. Even when traveling, enclosures must be kept to a minimum and dogs must be walked every 2-3 hours. Similar regulations exist in Finland.