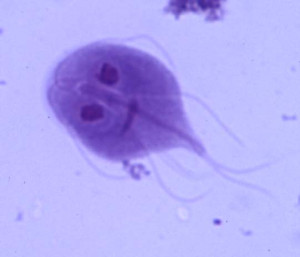 Giardia is found throughout the United States and in many other parts of the world. Often deemed the cause of “Traveler’s Diarrhea” in people due to many outdoor enthusiasts inadvertently consuming hidden giardia in contaminated waters.

Giardia is not a worm, bacteria or virus, but actually a simple protozoa (single-celled) parasite, the most common intestinal parasite that is found in humans. Although simple in form, those who may unknowingly inhale this parasite, may very well contract Giardiasis, an intestinal infection that can lead to a serious intestinal problems, of which is very contagious. 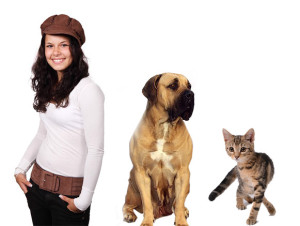 Not only does Giardiasis occur in humans, but in dogs, cats, and other animals as well, and the consequences are very similar for all species. But there are many things we do not know about this parasite. Experts are still not sure how many strains of Giardia exist and which strain affects which animal.

It seems the risk of humans acquiring giardia infection from dogs or cats is possible, but quite rare, (and vis versa). There are a large amount of strains specializing in just human infections, or just dogs and cats infections, while others are less picky in their hosts.

How giardia affects the body:

When giardia is ingested, whether by an animal or human, the organism travels down to the small intestine where it attaches itself to the intestinal wall, damaging it, causing an acute stomach upset. It then transforms to a trophozoite, which feeds on the host’s body, absorbing a considerable amount of nutrients, thus disallowing the host to take in the proper amount of nutrients and disrupting their digestion system.

During the feeding stage, the trophozoites continuously divide and reproduce, eventually transforming into a cyst, a tough protective capsule enclosing the larva of a parasite. Eventually, those cysts are passed through the host’s stool.

As soon as the cysts are released from the body, they are immediately able to infect another animal, thus continuing the cycle. These cysts can survive in the environment for months after excretion.

The likelihood of developing the disease increases as the number of cysts in the environment increases. There is also an increased risk for young animals or those with compromised immune systems. For humans, the risk is increased for children or people with an immunodeficiency, such as AIDS or cancer. In these cases, the protozoa could escalate the illness and cause severe cases of watery diarrhea, which can cause critical dehydration levels. 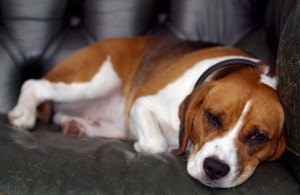 Unfortunately Giardiasis is usually asymptomatic meaning that there are usually no visible symptoms, even though there is a lot more going on the inside.  Look for subtle signs, like if your dog (or human) has recently become less active, lethargic, or experiencing weight loss even though they are still eating.

Although not always, there may be several instances of diarrhea. The stool may range from soft to watery, sometimes having a yellow tint to it, very pungent, may contain mucus, and occasionally contains blood.  Vomiting might ensue as well, although this is not a tell-tale sign as there can be many other causes for this to happen.

How is one exposed to Giardia? 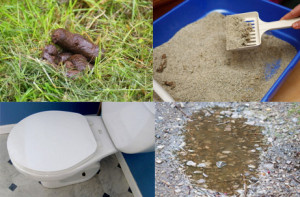 It is important to note that it is not possible to become infected through contact with blood. One of the most common ways that the parasitic infection spreads is by the ingestion of fecal matter that contains those cysts shed in the feces.

Pertaining to dogs and cats, Giardiasis is highly prominent in densely populated establishments, such as kennels, pet stores, and animal shelters, but can just as easily exist in nature, especially in nearby bodies of water from lakes and rivers to a small shallow puddle. Then of course giardia can lie directly in the pet owner’s backyard.

Your dog or cat may get infected by:

For humans, you might think, “this is easy to avoid, just don’t eat poop”, but it’s not that easy. Bits of fecal matter can exist in many places that are unseen by the naked eye. During your daily routine and unbeknownst to you, your skin or clothing may have in some way become soiled and you are now susceptible to having microscopic parasites enter your body.

Humans may get infected by:

How is Giardiasis diagnosed? 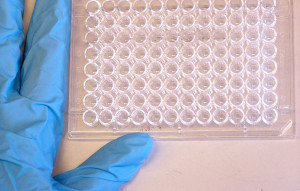 Your vet will want to rule out other possibilities for the intestinal infection such as improper digestion (maldigestion), unabsorbed nutrients (malabsorption), or IBD (inflammatory bowel disease) prior to recommending a treatment option.

Unfortunately, a routine fecal test may fail to locate the cysts in the sample as the cysts are shed at intermittent times and may not always come out with the feces.

Typically if you suspect the existence of Giardiasis but cysts are found, the vet will most likely want to conduct another test to be sure. It is common for the vet to run a test on serial stool samples, meaning a different stool sample is collected and tested once a day for three days.

The vet may use several different techniques to seek out the cysts. One is the use of a special zinc sulfate for augmented detection, another is a diagnostic test using ELISA (enzyme-linked immunosorbent assay) technology, a newer method developed in 2004. It’s a quick and fairly accurate exam that typically takes under 10 minutes to run.

How is Giardiasis treated? 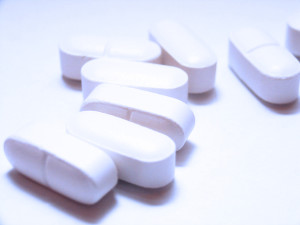 Keep in mind that medication is not always necessary, for if the host has a strong enough immune system, the giardia can clear up on its own within 4-6 weeks as the cysts shed. No special diet is necessary, but it is important to administer an appropriate amount of fluid and electrolyte to rehydrate the body especially if diarrhea is present. But if noticeable symptoms and intestinal problems are still reoccuring over an extended period of time, you may want to seek a medical professional.

The most common antibiotic used to treat giardia for both animals and humans is called metronidazole, regarded as the drug of choice for treating bacteria that lies within the pelvic region. The medication is typically supplied for a 5-7 day treatment plan.

There is another antiparasitic drug, fenbendazole, can be used alone and is many times given alongside metronidazole. The combination is usually given if the diarrhea has not been resolved after previous treatment.
A relatively quick and full recovery is seen in most cases, although those with compromised immune systems or of old age can experience more serious repercussions or even death.

Quinacrine hydrochloride has been known to be administered for those with chronic giardia, but is often avoided for its lack of effectiveness and harsh side effects.

Make sure you inform your physician of the possibility of pregnancy or if on other medications. Be aware of the side effects which may include vomiting, fever, and lethargy.

Unlike heartworm disease, there are no preventive medicines that you can give your animals to prevent the infection, but you can still take sanitary precautions for them and the rest of your family.

Giardia in Dogs, Cats, and Humans
Tagged on: Parasites