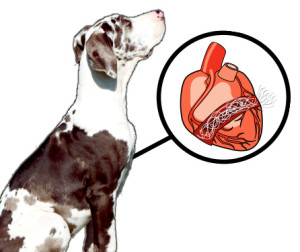 Heartworm disease is a serious and potentially fatal disease worldwide that affects pets, especially dogs. Dogs, being the most natural host for heartworms (full name Dirofilaria immitis), can have hundreds of worms reproducing inside their body once infected, eventually clogging the heart and lungs leading to an early and painful demise. For this reason, prevention for the duration of your pet’s life is vital, and proper treatment should be administered as soon as the first early signs are revealed.

The life cycle of heartworms and how they affect our pets

When heartworms (Filaria) are living in an infected animal, the adult females produce larvae (Microfilaria) that will flow throughout the bloodstream. When the main culprit, a mosquito, goes to feed on that animal and suck its blood, those larvae are ingested along with it. Once inside the mosquito’s body, the microfilaria goes through two molts during a 10-14 day period while steadily creeping into the mosquito’s salivary glands until it reaches its “infective” or transmittable stage.

When the infected mosquito goes to then feed on another dog, (cat, or other wild animal), the larvae is deposited onto the surface of the animal’s skin and seeps into the new host through the bite wound. 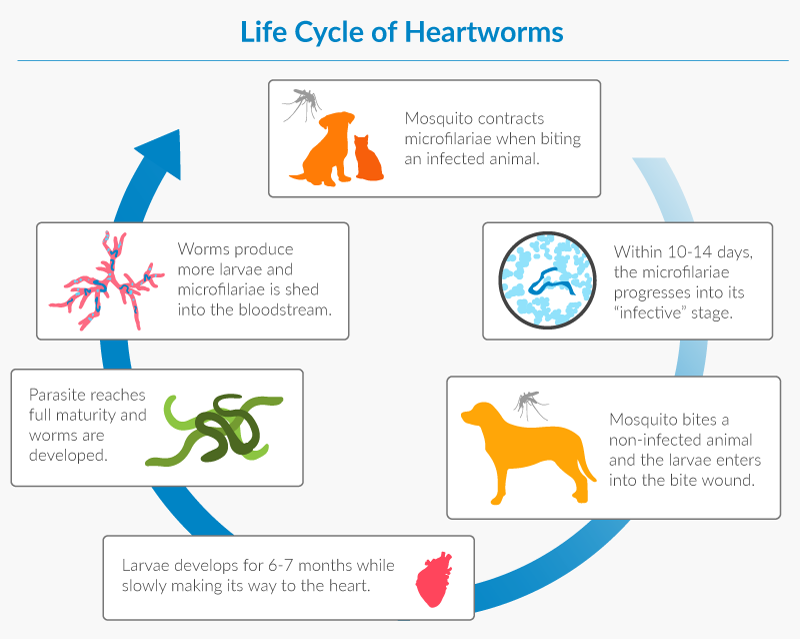 Once inside the animal (host), the larvae finds it way to the heart where it continues to develop for another 6 to 7 months, going through another two molts leading up to sexually maturity. It is this final stage when it reaches full adulthood that the worms can be detected with a medical device – a critical time for your dog to be tested before it gets any worse.

The adult worms can reproduce rapidly and grow up to a startling 14 inches long – the sheer mass will begin to block blood vessels, causing fluid to build up and not long after, the lungs will be unable to properly oxygenate the blood. High fluid accumulation causes inflammation throughout the body, making joints more and more painful, as well as significantly increasing blood pressure, which may end up causing heart failure. Note if you have a dog on the smaller end, know that the smaller the dog, the smaller amount of worms it takes to block bloodflow.

If the worms do not cause an relatively quick fatal result, they can actually continue living in the dog for 5-7 years (2-3 years in cats), without treatment. This makes them an optimum carrier for mosquitoes to prey on and spread to another animal, thus repeating the cycle all over again.

What are the telltale signs?

In the early stages of the disease, many dogs show few symptoms or no symptoms at all. It is not until the larvae begins to hatch and the worms begin feeding off the host and afflicting damage to the arterial wall, that any evidence can be seen on a x-ray.

At the first hint of heartworms present, your pet should immediately be taken to the veterinarian where there they can test for the presence of heartworm proteins. As the larvae invades the body, the immune system responds by producing large amounts of proteins to serve as antibodies to fight the infection. Upon closer inspection of the blood, any microfilaria that is found confirms the diagnosis. Sometimes further testing is needed and additional blood may be sent out to a specialized laboratory.

What happens if my dog tests positive for heartworms? 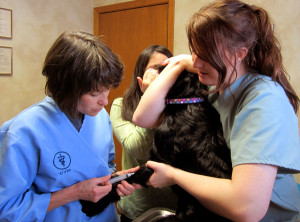 Thankfully in modern times, testing positive for heartworms does not always mean an early demise as most infected dogs nowadays are successfully cured. The key is detecting the heartworms as early as possible, limiting the dog’s activity, and administering the right medical treatment led by a medical professional.

The reasoning behind restricting their movement is because the more physical activity means the more blood pumping and the faster rate at which heartworms can attack the body. You don’t want to raise their blood pressure any more than it already has been.

A strict treatment regime is given until there are no more signs of worms (that are alive). Afterwards, your pet should be tested two more times that year to make sure they are in the clear.

If the heartworms are in a much more advanced stage, sometimes the only option left is surgery where the veterinarian will try to manually remove all the heartworms from the heart and veins. As long as enough blood flow is restored, your dog can be strong enough to fight the rest of the contagions off with the aid of medication.

Unfortunately, even with treatment, the damage from these worms can have a lasting damage to the heart, lungs and arteries, so it is important to closely monitor your dog for the rest of their life and get regular checkups at the vet to ensure a normal heartbeat and breathing pattern.

What medications exist to treat heartworms?

There is actually only one drug on the market, Melarsomine, and it is the only one that is approved by the U.S. Food and Drug Administration (FDA) for treatment of heartworm infection in dogs, can only be administered by a medical professional, and is aimed at completely eliminating all heartworms in 1 to 3 months.

Typically, a series of three melarsomine injections are given over a period of time. This is the current timeline for professionals to follow, recommended by the American Heartworm Society.

The treatment must be drawn out like this to promote the best chance of success and safety Your vet will be closely monitoring your dog for any negative reactions or side effects from the treatment, and some additional medications may be needed. It’s not a cheap remedy – at least $1000 in total cost!

How much at risk is my pet to contract a heartworm infection?

Many factors must be considered, not just location. While true that mosquito season differs from state to state, (the longest season lasting from april to august in the Southeast), mosquitoes can still be blown great distances by the wind and the relocate to off-season areas.

The ideal temperature for a mosquito is over 80°F, they will typically not bite below 50°F, but both mosquitoes and their eggs can hibernate in the winter, waiting for that warmer day to come out and look for prey. They can also take up residence inside your home, making it a risk for your indoor pets as well.

Although mosquitoes are the only source of transmission, the fact is that heartworm disease has been diagnosed in all 50 states, as recent as 2013, and it is highly recommended for your pet to be on prevention all year round.

It is good to know that heartworms cannot be transmitted through fecal matter, however what lingering dog waste can do is attract more mosquitoes that can be carrying the disease. 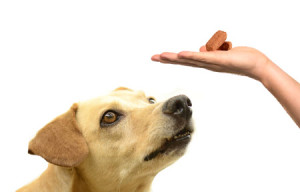 Heartworm preventatives can be administered to your pup as early as 6 weeks of age. From then on it should be given on a monthly basis (or whatever directions are stated on the product). Although these prescriptions have a very high percentage of being effective, a heartworm test should still be performed once a year. The reason for this is that something any number of things could do wrong – perhaps you had miss a dosage or gave it later than needed and you didn’t realize – perhaps you gave them an oral preventative but they later vomited it out – maybe you gave your dog a topical solution but they rubbed it off – or simply the preventative didn’t work (as no medication is 100% effective).

If you are aware in a lapse in prevention (one or more late or missed doses), call your veterinarian to see if another test should be done sooner.

If every dog should be taking preventatives, why do you need a prescription?
Heartworm preventatives must be purchased with a prescription, as a professional needs to ensure that you’ve maintained a steady supply and the preventatives have remained on schedule. The larvae can hatch in as little as 51 days if not destroyed and will no longer react to preventatives once matured, therefore it is very important to never miss a dose. If there is a chance of your dog having heartworms and they are still given a preventative, they run the risk of having a severe reaction and even death.

Past studies have shown that only 48% – 59% of owned dogs in the U.S. receive monthly heartworm prevention, and within that category, the average dog only receives about 5-6 monthly doses for the year.

Whatever brand you choose, all official preventatives are designed to destroy any heartworm larvae that may exist and stop them from developing into worm form. Where they differ is the other positive benefits they possess such as preventing hookworms, roundworms, whipworms, tapeworms, fleas, ticks, and ear mites. To date, there is still no one treatment that is an all-in-one.

One might wonder why you wouldn’t just go with the preventative that takes care of the most pathogens? Each preventative comes with its own set of risks, although it is meant to protect your dog, in some cases dogs can have bad reactions to the treatment and in rare cases it could be fatal. Make sure to consult with your veterinarian to discuss the pros and cons and pick one that is right for your dog.

Although the dog is the most natural host for heartworms, the disease can also affect cats, ferrets, wolves, coyotes, foxes, sea lions, and even humans.

Cats
Heartworm disease in cats is very different from heartworm disease in dogs, the biggest difference being that most worms will not survive a full growth cycle in a feline host. If and when the worms do reach the adult stage, only a small percentage will have survived and therefore less of them causing much damage.

Statistics show that out of 100 heartworms in dogs, 75 may survive and mature, with cats, only 3-5 may survive. 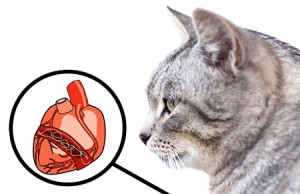 However, it does take only one worm in a lung to cause infliction and can cause certain signs of Heartworm Associated Respiratory Disease (HARD) such as coughing, wheezing and difficulty with breathing. Cats can even form an allergy to the microfilaria, resulting in a feline version of asthma.

Although heartworms are hard to spot in dogs, it is much harder in to find in cats, many times the first indication are many times an abrupt death. A slight cough or a sudden imbalance when walking may be your best clue and a vet appointment might be in order.

Sadly, the medical treatment used for infected dogs cannot be used for cats and there is less of a chance of them being cured. Intravenous fluids and antibiotics may be the only treatments, and possibly surgery to remove the heartworms if all else fails. Thankfully preventatives for cats are just as readily available as dogs.

Ferrets
Just like dogs and cats, ferrets can become infected with heartworms, but the negative effects can be much more rapid because their heart and overall body is so small. Just one worm can cause serious damage. Luckily for ferrets, heartworm preventatives are much less expensive!

Humans
People can also get heartworms after being bitten by an infected mosquito, but because humans are not a natural host for heartworms, the larvae usually die off before they become adult worms.

A very small number of people have ever been reported to contract heartworms, and because it is so rare and follows no real trend, it is not considered a risk factor for humans and no preventatives are considered necessary.

Heartworms in Dogs: How to protect your pup!
Tagged on: Parasites