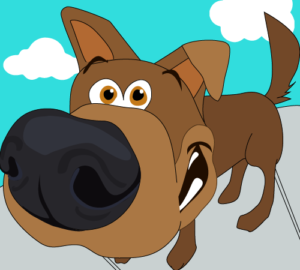 All vertebrates (including mammals, birds, reptiles, and fish) possess the five basic senses – sight, sound, taste, smell and touch – that provide ways to gather information and interact with their surrounding environment. Interestingly, characteristics of each of these senses and how one uses them can drastically differ for each species depending on their genetic makeup and how their senses progress during early development. So how is a dog’s sense of smell different from ours… and why?

Dogs Rely on Scent From Birth

Did you know that human babies gain their ability to hear and see before even being born? By the third trimester, a baby can see light, hear the outside world, and learn to recognize certain sounds – all while still in the womb.

Puppies, on the other hand, are born with both eyes and ears sealed shut, leaving the sense of smell as their only guide during their first weeks of life. A puppy won’t typically gain his hearing until 3 weeks after birth, while the eyes will begin to open around 2 weeks – even then, vision is limited to simple changes in light and movement. It can take up to 2 months after being born for a puppy’s eyes to become fully developed.

Throughout a dog’s life, their eyesight will never be as clear as what a human can see. Although not colorblind, a mature dog will maintain a limited view of colors, scope, and detail compared to us. But what dogs may lack in eyesight, they more than make up for in their powerful sense of smell. What we can see at a one mile distance, a dog may smell thousands of miles away.

The Biology of a Dog’s Nose

With each use of a sense, an animal has absorbed a variety of data from the outside world and merged that information into electric signals, which are then sent to the brain. When we smell something, that’s actually not one odor molecule’s interpretation, but a mixture of tens to hundreds of different odors whose composition is relayed to the brain at once, leading to a seemingly unlimited amount of scent combinations that we can detect. To better explain this process, let’s explore the olfactory systems (olfaction meaning sense of smell).

In humans, dogs, and most other mammals, smells are sensed by the Main Olfactory System. When odor molecules are breathed in through the nose, they travel towards the upper region of the nasal cavity where they are captured by tiny hairs called cilia; These hairs are attached to concealed olfactory receptor cells that are embedded within the olfactory mucosa, which is made up of neurons and axons in a densely packed cell-packed tissue called epithelium. 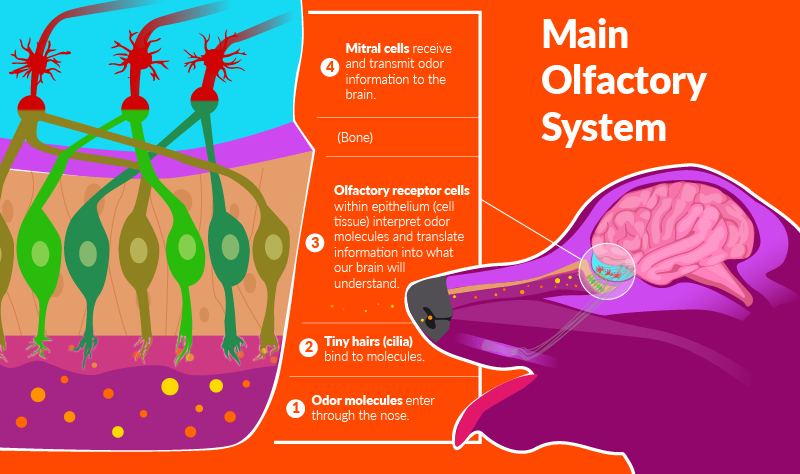 Each receptor cell will gather information from an odor molecule and convert it to an electric signal that is sent to a mitral cell, located in one of the two main olfactory bulbs (formations of neural tissue in the forebrain that solely handles smell). From there, the mitral cells will transmit the signal to different areas of the limbic system within the brain to trigger emotion, memory and motivation. 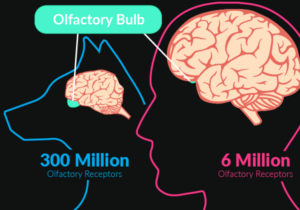 Humans possess around six million of these olfactory receptors, and although it is hard to determine just how many different scents we can interpret, many researchers claim the number to be in the trillions. With that being said, realize that dogs have up to 300 million olfactory receptors, making them much more aware and sensitive to different smells. With all those receptors in place, it’s no surprise that a dog’s main olfactory system is three times larger than in humans even though their brain is 1/10th of the size.

Dogs also possess an entire secondary smelling system called the Accessory Olfactory System, which many animals (but not humans) can use to smell things we don’t seem to be able to – mainly fluid-based stimuli that contain pheromones (invisible chemical signals that carry information between individuals of the same species). 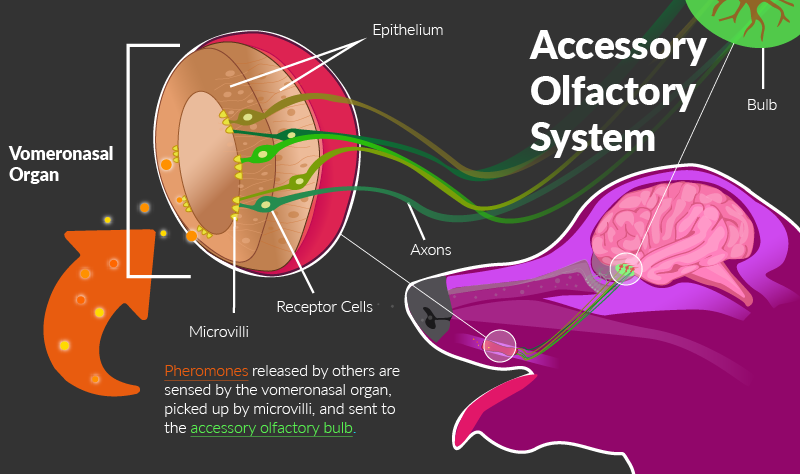 This olfactory system is dependent upon the vomeronasal organ, a pair of fluid-filled sacs at the bottom of the nasal passage that travel up around the vomer bone, below the nasal septum and above the mouth’s palette. Most likely due to natural evolution, the vomeronasal organ (also known as Jacobson’s organ) is either absent or non-functioning in modern-day humans.

The vomeronasal organ, like the mucosa, is lined with epithelium tissue that contains its own separate set of receptor cells. Instead of using cilia, the cells have an outer membrane (called microvilli) that protrudes out in a brush-like fashion to capture the more non-volatile odors that are inhaled. The receptors send electrical signals to the mitral cells located inside the accessory olfactory bulb (which sits aside the main olfactory bulb), but instead of the signals going to more general areas of the brain, they are specifically sent to sections of the amygdala, which handles more instinctive emotions such as fear, aggression and mating urges.

On top of having multiple olfaction systems and a large amount of olfactory receptors, the dog’s nose is designed to be able to take in scent continuously (not just on inhale like in humans). When we inhale, we smell and breathe through the same airways within our nose, but a dog bears a small fold of tissue just inside their nostrils so that when they inhale, airflow can be separated into a path for olfaction and the other for respiration. Furthermore, dogs can smell separately through each nostril, allowing them to better determine where the scent is originating from. Upon exhalation, the expelled air exits through the side slits of the nose as to not disturb any further odors the dog may take in.

So Why Smell Dog Butts? 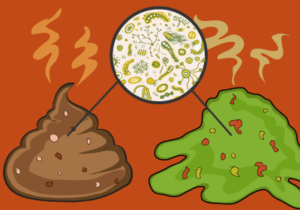 If you are able to understand the science behind a dog’s strong sense of smell, one question that may remain is why on Earth, with of all the odors out there, would a dog want to smell another dog’s butt? And it’s not just butts, but poop, dead animals, and certain other bodily fluids that are just some of the last things humans would want to put their nose to.

For us, things like spoiled food, vomit, and poop all smell horrible – and for a good reason; All of those substances contain bacteria and potentially harmful parasites, which our olfactory system is telling us smells bad in order to protect from potential illness or disease.

Dogs, on the other hand, can gain a lot more information out of a pile of poo. 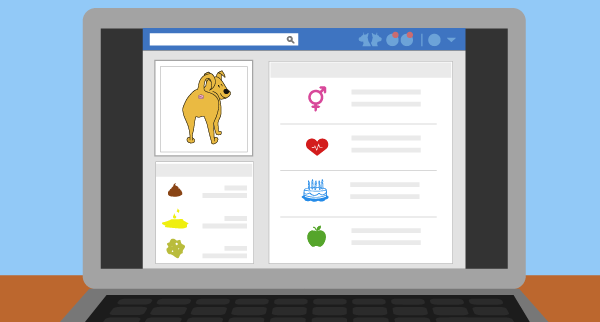 In the wild, a dog’s powerful nose enables him to detect prey, scavenge for food, avoid predators, and help find a suitable mate for breeding. But most significantly, their nose allows them to communicate with other dogs. Since dogs only produce sweat and release body odor on a few small areas not covered in fur (such as paw pads, nose, ears and mouth), a large part of their scent can be detected in their genital and anal areas, lined with apocrine and sebaceous glands that secrete a unique scent when relieving themselves. It is thought that this secretion leaves out a certain set of pheromones (kind of like a social profile) for other dogs to interpret, letting them know of their age, sex, health status, diet, and whether they were scared or excited at the time. While urine marking is the most common form of scent marking, feces can also be used to leave behind a message. 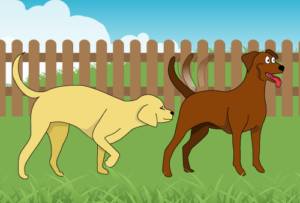 A well socialised dog will politely greet another dog by sniffing the buttocks and possibly other places of the nether regions to gather basic information. On walks, a healthy habit of a dog is to track down scents of other animal’s urine or feces in order to gain more knowledge about others in the neighborhood. Most dogs will then continue the conversation by leaving their own deposits around the same area.

…Although it’s a fascinating form of communication, I am thankful for the gift of human speech.

How is a Dog’s Sense of Smell Different from Ours… and Why?
Tagged on: interesting pet facts